Once Upon a Time in AP European History 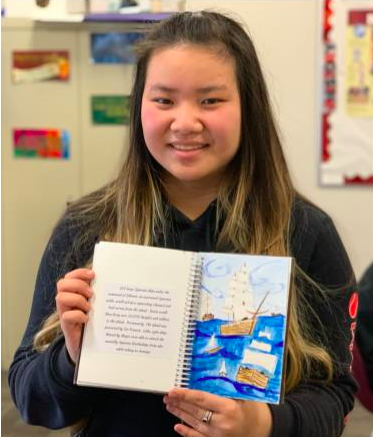 Mrs. Rose’s AP Euro class has been studying the five major European religious wars that took place between 1524 and 1648: the Dutch Revolt, Spanish Armada, English Civil War, French Wars of Religion, and Thirty Years’ War. As part of this unit, each student wrote and illustrated a children’s bedtime story about one of the wars.

According to Mrs. Rose, “If there was someone who didn’t know about these wars, after reading these books, they would know all the main people of the war, the main events of the war, and the context of what was happening in the world at the time.” Being able to put the wars in context with other historical events was a requirement for the project and significant to Mrs. Rose, who says it is important to understand that world events don’t develop in a bubble.

One particular project amazed Mrs. Rose, who explained that sophomore Livia McNeil created a book that went “above and beyond, in AP Euro, what my expectations were for the project.”

Livia chose to feature the events of the Spanish Armada on multiple pages of hand-drawn, vividly water-colored pictures that accompany her descriptive text. Even her cover, which is hand-distressed to look vintage, shows attention to detail. She spent over 30 hours on it, according to Mrs. Rose who explains that Livia’s “pictures are beautiful, and the writing is accurate, very well done and covers the war well. In everything she has done this year, she has really put pride into what she’s doing.”